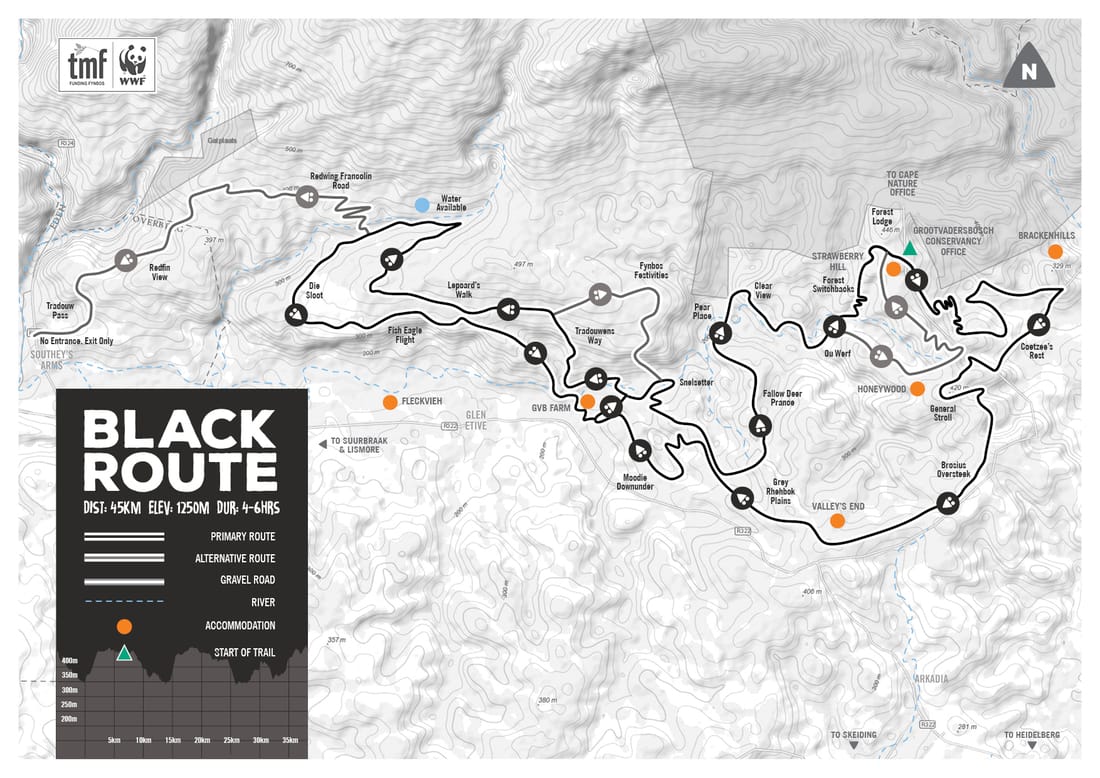 Coetzee’s Rest: The private cemetery of the Coetzee family that have farmed here for 5 generations

BRACKENHILLS: A luxury tented camp with an abundance of local game.  A Cape Nature partnership site.

Moodie Down Under: Private cemetery of the Moodie family. The first grave is of Margaret, wife of Benjamin Moodie, who was the first Moodie to own Grootvadersbosch Farm in 1817. All subsequent generations are remembered here.

Tradouwens Way: Leucadendron Tradouwens is an endemic species of cone bearing fynbos that only occurs between the Tradouw Pass and Grootvadersbosch.

Fynbos Festivities: Admire the Kleinberg fynbos (Mimetes cucullatus, Lanaria lanata, Erica Melanthera and many more) with views of the valley below.

Red Wing Francolin Pass: Francolin is often seen skulking in the scrub and flying up as you approach. Listed as least concern on the red data list.

Redfin view:  The Tradouw redfin is confined to small populations in the Tradouw and nearby Moeras Rivers. A critically endangered freshwater fish, threatened by water pollution and invasion by small-mouthed bass.

Tradouw Pass: The term Tradouw means “footpath of the woman” and was used by the Attaqua Khoikhoi. In 1858, Karoo farmers requested a trade route to the Breede River and to Port Beaufort beyond. In 1869, Thomas Bain and his prisoner work force began construction. The pass was finally completed in 1873.

The sloot (water furrow) Water is the most important resource on any farm. This sloot leads water from the Kruisrivier forest across the farm Glen Etive to the Tradouw farms.​

FLECKVIEH: One of the few dairy farms with dual purpose Fleckvieh breed. Also a guest farm that produce their own cream cheese.

Fallow Deer Prance: An exotic antelope species introduced into the area. Often found in groups of 5 or more. The males have large antlers.

Pear Place: Settlement of 10 families that lived here as ‘bywoners’ (sharecroppers) 1900 - 1950. There was a shop, a school and a blacksmith. They built wattle and daub houses and practiced subsistence farming.

Clear View: A view of the Grootvadersbosch River that has been cleared of invasive vegetation by the the Conservancy, with funding from government, landowners and private partners. ​

Ou Werf: One of the cottages available for rent on Honeywood.