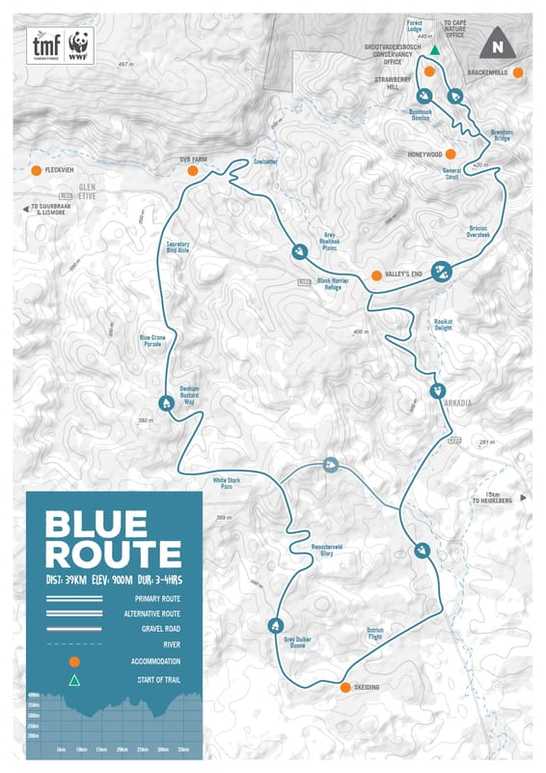 STRAWBERRY HILL: A guest house with a focus on mountain biking. The farm hosts the Grootvadersbosch Conservancy office. The farm is named for the wild strawberries that used to grow here.

HONEYWOOD: The guest farm sells raw honey and provides pollination services. Guest houses are spread across the farm.
Puffader Alley: Puffadders are common in the conservancy (brown/white chevron-like patterns). Other venomous snakes include: boom slang, and the occasional Cape Cobra. If you encounter one, be calm and let them pass.

Brendon’s Bridge: Brendon grew up in the conservancy and assisted to build many of the trails. He tragically lost his life too early in an alcohol-related car accident. He was loved by many.

Ostrich Delight: Look out for the large birds that will race you up the road. The black and white are the males and the females are a lightish brown

Renosterveld Delight: Renosterveld is part of the Cape Floristic Region and is dominated by grasses and shrubs from the daisy family. Renosterveld is considered the richest bulb habitat on earth and is renowned for its incredible spring flower displays. Because it is found on fertile soils, it has been widely converted to croplands. Less than 5% now remain. This unique habitat is a biodiversity hotspot.

White Stork Pass: is a large bird with white plumage, with black on its wings. Rated least concern on the red data list.

Blue Crane Parade:  Unmistakably beautiful blue/grey birds which are South Africa’s National bird. You could be lucky to see chicks and juveniles in Spring and large flocks in Winter.

Secretary Bird Aisle: Very large raptor- eagle-like body on crane-like legs. Look out for the breeding pair in this vicinity often seen hunting together in the open lands. Rated vulnerable on the red data list.