You can download a pdf version of the old route here.

Information on the Green Route 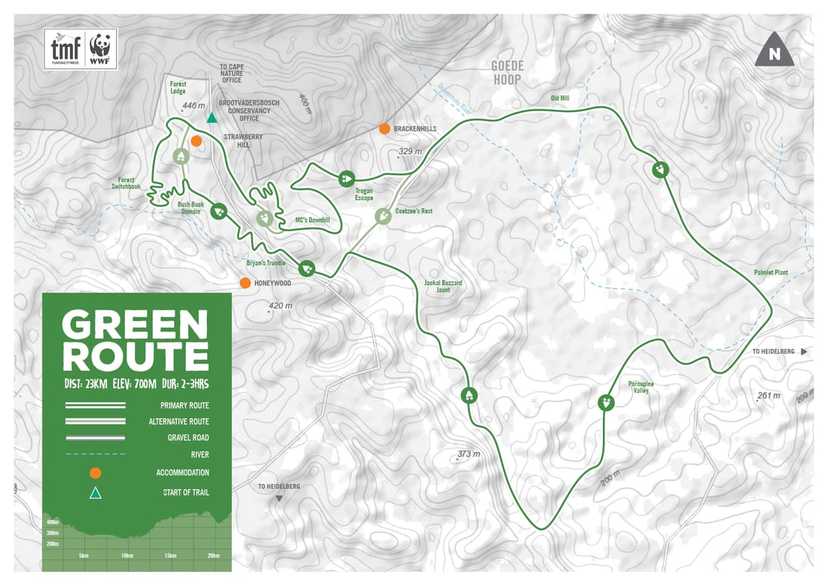 MCs Downhill: A section of trail sponsored by a legend Australian mountain biker who visited the area for the annual pumpkin festival race.

Coetzee’s Rest: The private cemetery of the Coetzee family that have farmed here for 5 generations

BRACKENHILLS: A luxury tented camp with an abundance of local game.  A Cape Nature partnership site.
​
Nerina Trogon Escape: Normally found in the indigenous forest, this beautiful green and red, medium-sized bird has been spotted in these wattle thickets.

Old Mill: The Coetzee family milled wheat for the whole district in the 1800s. The mill was closed in 1880. The farm was later divided equally between 3 children-including a daughter which was unusual for that day and age.

Porcupine Valley: You’ll not go anywhere without seeing a quill or two but as they are nocturnal you’ll only see them at night. There are very many across the conservancy.

Jackal Buzzard Jaunt: A common resident. Listen for its distinctive call much like a Jackal. Recognized by its rich brown rufous breast. Listed as Least concern in the red data book.

Bryan Trundle: This section of trail was sponsored by a legend mountain biker called Bryan.