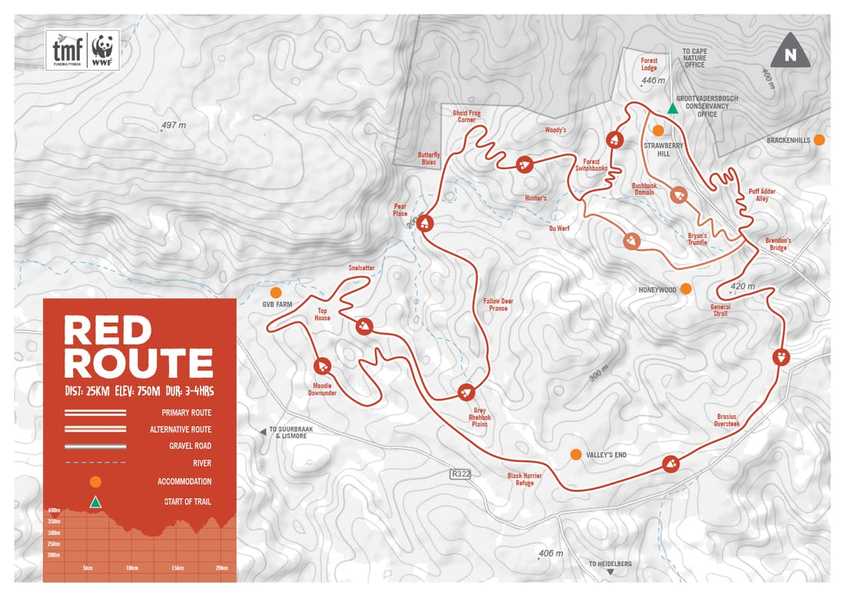 A challenging route on single and rough jeep track. This will feel like 40km so make sure that you are prepared.
Distance: 25km
Elevation: 750m
Duration: 3 to 4 Hours
Terrain: Single track and rough jeep track (plenty of steep climbs)
​Permits: Grootvadersbosch Conservancy office, Selected guest houses, Delish in Heidelberg

Puffader Alley: Puffadders are common in the conservancy (brown/white chevron-like patterns). Other venomous snakes include: boom slang, and the occasional Cape Cobra. If you encounter one, be calm and let them pass.

Brendon’s Bridge: Brendon grew up in the conservancy and assisted to build many of the trails. He tragically lost his life too early in an alcohol-related car accident. He was loved by many.

Moodie Down Under: Private cemetery of the Moodie family. The first grave is of Margaret, wife of Benjamin Moodie, who was the first Moodie to own Grootvadersbosch Farm in 1817. All subsequent generations are remembered here.

Top House: One of the cottages available for rent on GVB farm.

Fallow Deer Prance: An exotic antelope species introduced into the area. Often found in groups of 5 or more. The males have large antlers.

Pear Place: Settlement of 10 families that lived here as ‘bywoners’ (sharecroppers) 1900 - 1950. There was a shop, a school and a blacksmith. They built wattle and daub houses and practiced subsistence farming.

Butterfly Blues: Look out for the endemic blue emperor butterfly, Charaxes xiphares occidentalis. This is the most southern subspecies and confined to fragmented forest habitats.

Ghost Frog Corner: The forest is home to a subspecies of the rare ghost frog, often found near white water streams deep in the forest. The frog is endemic to the conservancy.
​
Hunters: One of the cottages available for rent on Honeywood.

Ou Werf: One of the cottages available for rent on Honeywood.

Woody's: One of the cottages available for rent on Honeywood.

Bryan Trundle: This section of trail was sponsored by a guy called Bryan.